Fisheries Program: Alaska Town Manages World-Class Trout: BLM FISHERIES ALASKA ALASKA TOWN MANAGES WORLD-CLASS TROUT You may have heard of the plight of the Village of Kivalina, perched on...
Posted by Unknown at 10:43 AM 2 comments:

Email ThisBlogThis!Share to TwitterShare to FacebookShare to Pinterest
Labels: Fishing

So I was fishing this weekend in the Cool Spring Lake in the Wilderness Presidential Resorts near Spotsylvania, Virginia with my good friends at FishingCommunity.Org.  It's early January and the air (and water) is well settled into being cold...but the day was warming up unusually nice so our morning fishing session was on...our early dawn fishing action proved non-existent to slow...but bank fishing for leaves was fair to good...sigh.

Paul and I gave up to go get some coffee and get ready to work. Pete ended up getting a little action as the day warmed up.  He mentioned that the largemouth he caught had bright red lips.  After the obligatory female fish jokes, I didn't think much more about it.

However, the afternoon fishing proved much different!  At least for those using silver blue fox spinners with a quick retrieve.  Check this guy out! 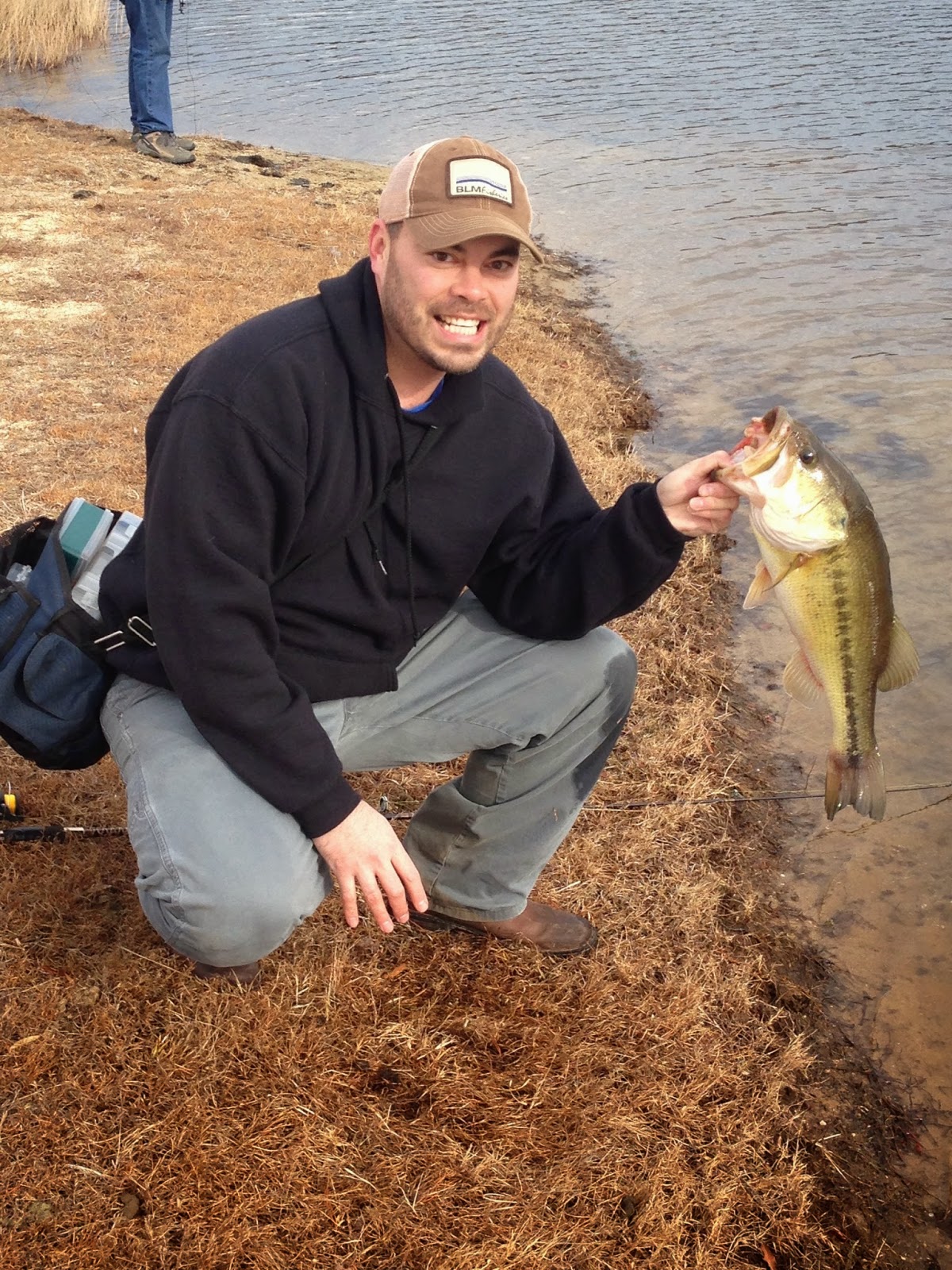 I also hooked into several nice smallies and they all were all robust and healthy like that.  They were all also noticeably slow in fight and lack of any surface water explosions from being cold.

And...they also all had very bright red upper lips as well as in the gills and back mouth.  But they were definitely feeding.  Kinda freaky. 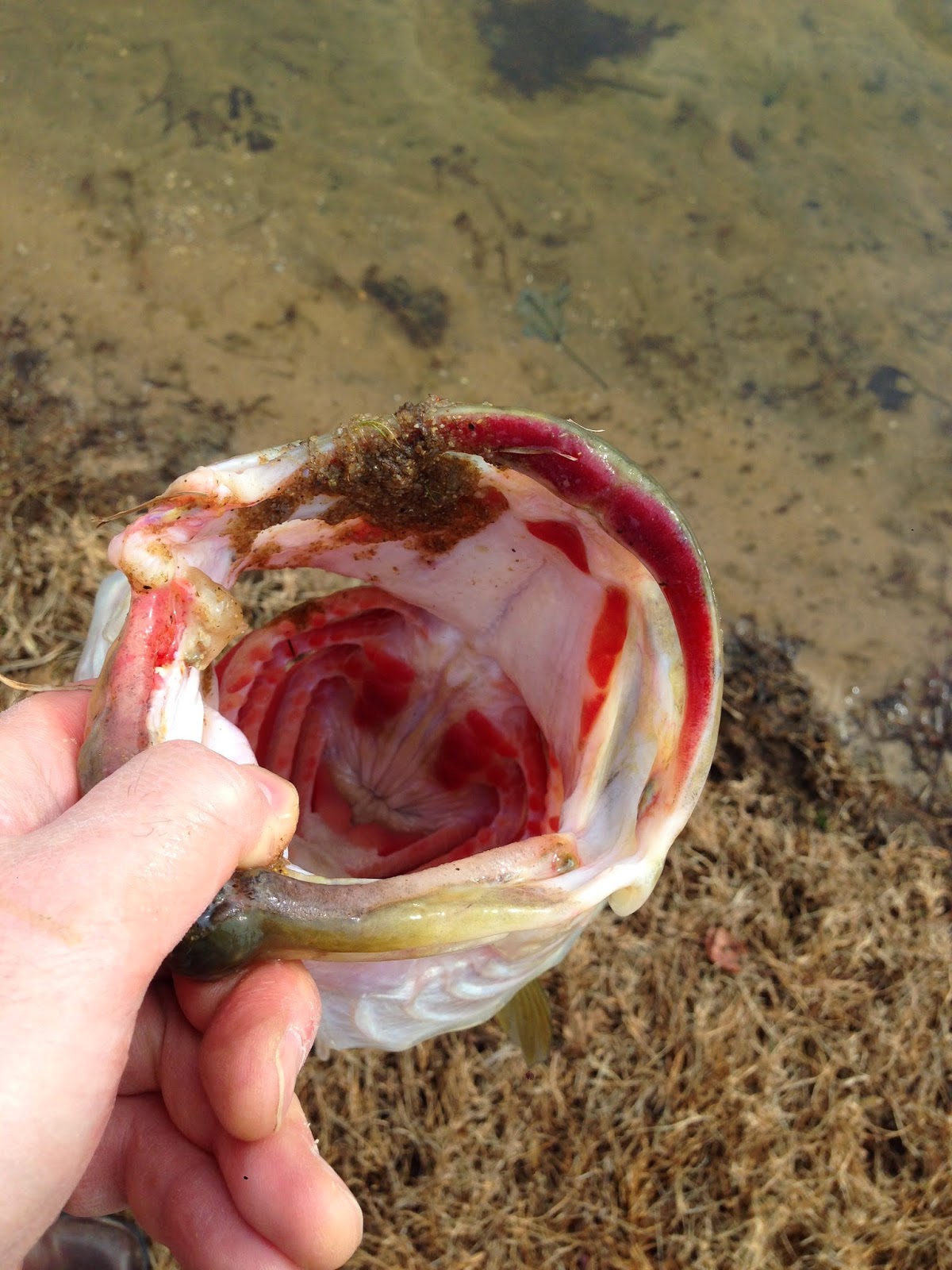 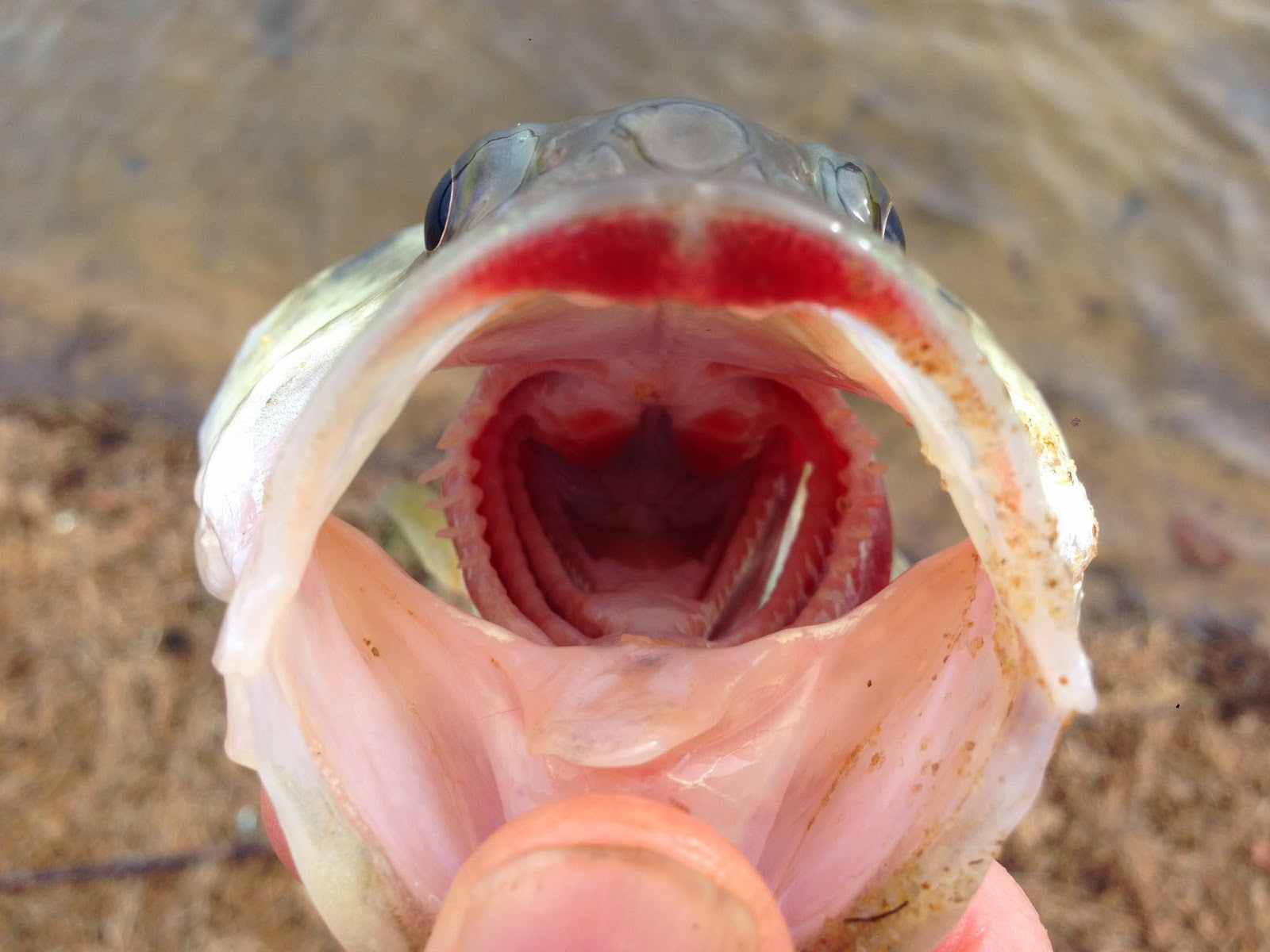 So what the heck is going on here?

Here's what I found out:
- no one really knows, but it pretty much happens everywhere,
- it happens to large and smallmouth bass and some other species...but not all...it doesn't happen in lots of other fish
- it happens when the water temperature (and fish) are getting cold and different species mouths turn red starting at different temperatures,
- it doesn't appear to have any effects to the health or feeding of fish,
- it doesn't appear to be any type of wound...just blood closer to the skin, and
- it does appear to make the fish more kissable...(sorry, can't help it)

So, here is my theory:
- the reddening appears to occur distinctly in the fish's toothpad and similar functional mouth (pharyngeal) areas.  Those patch lines are pretty distinct and repeated.
- these tooth and mouth areas also happen to contain lots of other taste and nerve receptors used for sensing all kinds of things like whether to keep swallowing a food item (such as a tasty minnow) or spit out a food item that is "not right" (such as Paul's frog lure).
- the red may be increased blood flow to these areas related to the sensing organs...and I think there is something going with that.  Perhaps more or less nerve or pain sensitivity, more or less tasting, more of less ability to feel certain prey, or
- something else entirely different and unrelated...and still remains a mystery.

Posted by Unknown at 3:14 PM No comments: